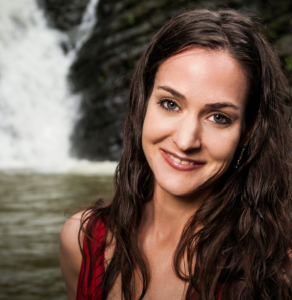 Erika Awakening is now a location-independent entrepreneur. This photo was taken in Costa Rica. She can teach you how!

Hey before we get started, why not take a moment to connect with me on Google+ …

Sweet, thanks and good to meet you. Now I wanted to take a minute to introduce myself, and answer the question you are probably asking: “Who is Erika Awakening?”

The short answer is that I am a life coach who specializes in the “toughest cases” … I help the people who tried everything else and nothing worked for them.

I didn’t start out as a life coach. I actually started out as a very successful lawyer … but more on that later.

What happened several years ago now is that I found myself suddenly in a hospital bed on the brink of death. I’ll spare you all the gory details, but suffice it to say that I was suffocating, drowning, and dehydrating all at the same time … and I was totally immobilized and barely able to breathe, and for a week in the hospital it was touch and go about whether I was going to live or not …

Let me tell you, nothing focuses your attention like a near-death experience.

For a couple of years before that, I had already been trying to “solve” some problems that had cropped up. My young body was racked with chronic and debilitating pain. My relationships were disastrous. I felt isolated and alone. And I was doing a job that was prestigious and paid the bills, but my soul was screaming out that this was not my life purpose.

While I was on my near-death bed, I had some conversations with God (or the Universe, or Higher Self, or whatever you want to call it).

In these conversations, I acknowledged that all my superficial successes had not made me happy, that I had made the wrong decisions and priorities in my life.

I knew there were a lot more life experiences that I wanted to have, and I knew I had to do something in life that I could be proud of, something that mattered.

I made a promise that week on my near-death bed. I said, “If You give me another chance, I promise I will do it differently this time.”

And I kept that promise. Shortly after recovering enough to go home, where my parents had to come and take care of me (like a grown-up infant) for weeks of my convalescence, I began the journey that led me to be talking to you right now.

It wasn’t easy to figure it out. I spent the next few years reading countless books, taking dozens of live, audio, and video workshops and seminars, and working with some of the best coaches and healers in the world.

At first, I was really intrigued by the “Law of Attraction” materials, but like so many of my readers who have sent me emails over the past few years, the Law wasn’t working for me … I would set intentions, visualize, practice the techniques that were being recommended, but I was not seeing consistent results, and I was getting more and more frustrated.

The first real breakthrough came when a coach sent me to a website to learn this odd technology called “tapping” or Emotional Freedom Techniques.

I was skeptical but desperate, and I saw that tapping was based on acupressure. I had received a few acupuncture sessions in my life and knew that acupuncture was covered by my medical insurance, so I figured there might be something to this.

Well, even if it was a “coincidence,” I was desperate and nothing was working for me. What did I have to lose by learning more?

Bemused, I went back to my hotel room and began studying and practicing this odd “tapping” technology.

At first, the results were wildly inconsistent and sometimes the OPPOSITE of what I wanted.

But I noticed that when tapping did work, it REALLY worked. And I noticed that I would FEEL much better. Considering that I had been desperate and depressed, feeling better was a huge benefit to me.

I went to some tapping practitioners for sessions, and I also began to combine tapping with other technologies that I had been learning, such as non-violent communication, radical honesty, and a life-changing book called A Course in Miracles. I experimented whenever I had free time. I “figured out” a bunch of shortcuts that could get results from tapping in a much shorter period of time than the traditional techniques that are being taught.

I think my Holistic Belief Reprogramming (HBR) coaching system is the best on the planet. I left behind a brilliant legal career to bring this system to the world, and I stand behind it. I honestly hope you get a TON of value from my system.

To your spectacular success,

p.s.  To learn more about Holistic Belief Reprogramming by Erika Awakening, and how it goes beyond any other personal development method you may have tried, click here.

p.p.s. To sign up for personal coaching with Erika Awakening, so I can help you create YOUR dream life just as I have done for myself and so many of my clients, go to my coaching page here.