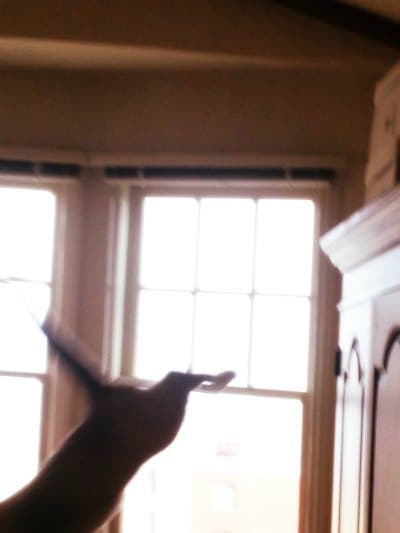 Harvey the Cat celebrating the day after our vomiting scare, thanks to everyone who tapped for him.

Here’s a little metaphor for you today …

So I have this orchid that I’ve been nursing along for years. It gave me lots of beautiful foliage but no flowers. For years.

I considered letting the orchid go. I said to myself, “if it hasn’t bloomed by now, it probably is not going to bloom.” And I almost put it downstairs in the common area to be re-homed.

Then I tapped about it a few weeks ago. Lo and behold, after years of nothing, it’s sending up a flower shoot.

I find this very symbolic of the dilemma right now. Cut your losses vs. don’t quit right before the miracle happens.

If I had given the orchid away a few weeks ago, as I almost did, I would not be seeing the miracle now …

How long do we stay committed to manifesting our miracle before we throw in the towel?

Today’s Gold Membership videos, by popular demand, are the early Harvey healing videos. For those of you who have been with us since the devastating night he was paralyzed from the waist down … you know it’s been quite a journey.

We had not just one but several near-death experiences.

The “easy way out” was beckoning … euthanasia.

There were times in the past eight months that I really did not think we would get to the other side, just like with the orchid. I really was not sure Harvey was going to make it.

And it’s with some sadness that I share this with you … I struggle sometimes with how to coach other people. Do other people want to make this kind of commitment, understanding that everything else in my life went by the wayside to save Harvey’s life?

It feels worth it now, but how do I “sell” such an arduous process to other people?

I think back on some of my other results. The chronic knee pain that had not responded to surgery, physical therapy, and stopped responding to pain killers … it magically disappeared one day after about three and a half years of tapping emotional issues. I can do squats now without any pain. I never believed that would be possible again.

But who is willing to hang in there and trust the process for three and a half years, as the Divine works its magic through this process in circuitous ways that we don’t necessarily understand?

As many of you already understand, these videos are a vulnerable share for me. In most of the Harvey healing videos, I am not wearing any makeup, rarely showered, there is no “performance” at all. These are real, raw videos of coping with an absolutely devastating trauma one moment at a time. Walking in faith for months with no guarantee of a happy outcome.

Who is willing to make that kind of a commitment?

Harvey the Cat is back to 11 pounds now, up from 7 pounds at the scary lowest. He spent a good part of today lounging in sun beams around our home. None of the “professionals” believed this was possible. It was possible, but it required a commitment that I perceive is way beyond what most people are willing or able to offer … am I wrong?

With all that said, I hope you enjoy the four new EFT tapping videos.

As we have talked about many times, all of the videos are metaphorical. So even if it appears not to be “your issue” … I guarantee if you just let your subconscious mind draw the parallels, there will be a metaphorical application to your own life. And it just might be that a seemingly unrelated video … turns out to be the key to resolving your most stubborn and frustrating issue!

Remember also that if you have been intrigued to get one or more of my 30-Day Challenges, or to sign up for private coaching, I do offer payment plans. My clients often manifest the money to pay off their payment plan faster, once they make the commitment. Email or private message me on Facebook to set up your own personal payment plan. New Year’s is always a great time to set new intentions and make big changes!!